Santa Barbara had its first permanent European residents as Spanish missionaries and soldiers who arrived in 1782 and constructed the Presidio. They were sent to both secure the Spanish claim to the region and to convert the indigenous peoples to Catholicism. The most dramatic event of the Spanish period was the powerful 1812 earthquake, and tsunami which destroyed the town. The Spanish period ended in 1822 with the conclusion of the Mexican War of Independence, which terminated 300 years of Spanish colonial rule and transferred control to the newly independent Mexican government. Santa Barbara fell bloodlessly to a battalion of American soldiers in 1846 during the Mexican–American War and in 1848 it became part of the expanding United States. To learn more about this wonderfully unique area please visit the Santa Barbara website here.

Elite Home Services is a local residential General Contractor, Remodeler and Handyman that would enjoy the opportunity to help you with your Santa Barbara home improvements.

WARM FEEL TO THE KITCHEN

The next images are also from Santa Barbara. The first highlights another bathroom remodeling project with chevron gold marble floor tile coordinating with a gray veined marble subway tile on the shower. The second shows a bathroom remodeling project with all white marble hex floors going all the way to the walk-in shower followed by large pieces of marble tile on the walls. 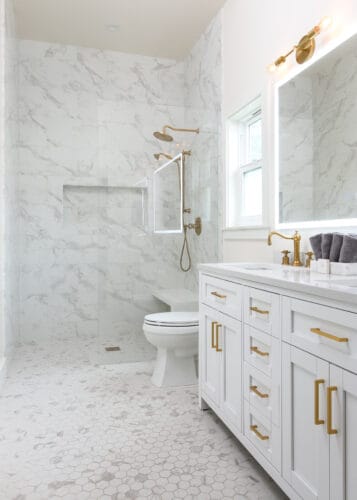 Contact Elite Home Services today so that we can schedule an appointment to help make your Santa Barbara Remodeling dreams come true.