Solvang is in the Santa Ynez Valley. There is a distinct feel towards the Scandinavian culture, and the city is known as the unofficial “Danish capital of America.” The town was founded in 1911 and developed as a theme town. Most of this occurred after World War II after someone returned to Solvang from a trip to Denmark and he first completed his Danish-styled home. After he went on to build the first of the village's four windmills. A little later, a local architect gave the older buildings a new look, adding façades in so-called "Danish Provincial" style and creating a new tourist attraction. While much was done to create an "authentic" Danish atmosphere in the town center, it has been pointed out by Scandinavians that fake thatched roofs and artificial timbering are largely a result of local interests in general rather than those of the Danish immigrants themselves. The older buildings have simply been restyled to look Danish even if there was nothing Danish about them originally. To learn more about this beautiful area please visit the City of Solvang website here.

Elite Home Services is a local residential General Contractor, Remodeler and Handyman that would enjoy the opportunity to help you with your Solvang home improvements.

The picture on top shows a kitchen remodeling project we did for our clients in the Solvang area. You will see an L-Shape kitchen with white shaker cabinets and calacatta quartz countertops. And the image that follows shows the same project where we show off the two-toned shaker cabinets, with a mix of white uppers and medium stained walnut bottoms. 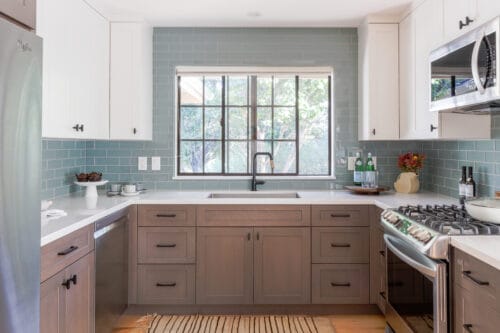 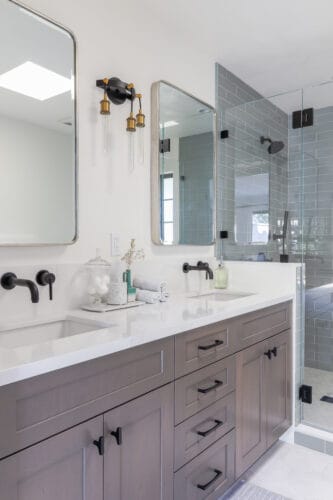 Following you will see a bathroom remodeling project featuring a walk-in shower with a frameless pivot shower glass door.

The next image highlights another dual tone kitchen remodeling project by combining white and dark stained slab cabinets. We created a focal point by bringing the calacatta quartz countertop all the way up to the backsplash.

Contact Elite Home Services today so that we can schedule an appointment to help make your Solvang Remodeling dreams come true.